A maximum amount is available for distribution amongst all 'other dependants' who meet the eligibility criteria described in 7.5.1 (section 263(1)(b) MRCA). See CLIK for the most up-to-date amount payable.

In addition to there being a maximum amount set for the total compensation payable to all dependants, there is also an upper limit to the amount payable to each individual dependant (section 263(1)(a) MRCA).  Both current upper limits are available in CLIK.

Because it may be necessary to distribute a fixed amount amongst a number of dependants, delegates should do everything possible to ensure that all the dependants who are entitled to claim have done so.

Put simply, the dependant must have either been in receipt of some form of payment from the member, been reliant on the member economically or received regular services from the member which can be translated into an economic value.

No other factors may be taken into account.  As mentioned above, the amount is limited by the maximum payable to an individual and the total amount payable to all other dependants. This limit — ation on the amount of compensation payable reinforces the need for the payments to be appropriately allocated to all dependants based on the level of dependence and time of dependence for each recipient as at the member's death.  The maximum figure payable can be located in CLIK in the Compensation & Support reference Library.

Calculating the Rate of Payment for Other Dependants

When calculating the rate of payment, each case will need to be considered on its own merits.  Once the delegate is satisfied that the person meets the eligibility criteria for 'other dependant', they are then required to determine the weekly value of the economic support being provided and apply the figure to the Actuarial Table for War Widows based on gender and age at next birthday (refer to Fact Sheet MRC29 for a copy of the Table).

For example, a member, prior to their death, was making regular payments to his father to assist with general living expenses in the amount of $100 per fortnight and there is evidence to suggest that the payments would be made for the life of the dependant.  In this example, the father's age next birthday is 60 and the weekly payment amount is $50.  This figure is multiplied by the conversion rate of 884.0 to give a lump sum payment of $44,200.00.

Whilst the above example is relatively straightforward and will not reflect the often complex nature of ongoing dependency (and the fact that there can be multiple 'other dependants'), it is intended to provide a basic overview of the calculation methodology only.  More complex matters should be referred to the Discussion Line if further guidance is required.

On the following page is a flowchart of the steps to be taken in determining whether a person is an 'other dependent' who may be entitled to compensation under the MRCA. 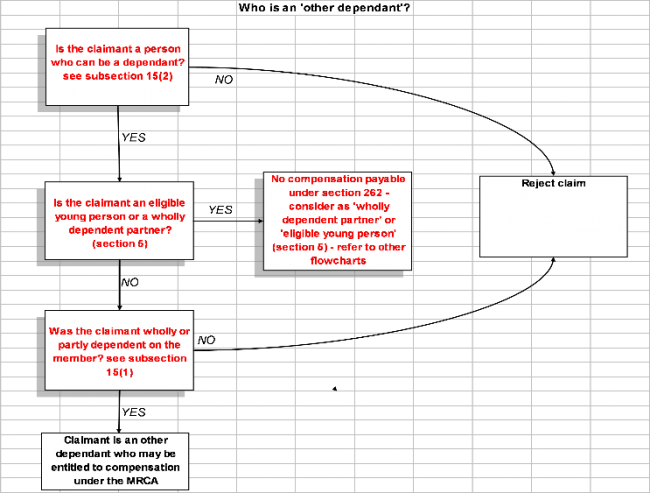 More → (go back)
Previous up Next