Prior to 1 July 2013, section 12 of the Military Rehabilitation and Compensation (Consequential and Transitional Provisions) Act 2004 (CTPA) required that any person with an accepted disability (AD) under the VEA who lodged a claim under the MRCA in respect of an aggravation of their AD must be given a choice between:

Specifically, the MRCA applied to an “aggravation” of the claimant's VEA AD if:

However, the removal of section 12 of the CTPA on 1 July 2013 (following the passage of the Veterans' Affairs Legislation Amendment (Military Compensation Review and Other Measures) Bill 2013) means that any aggravations of accepted VEA conditions after this date are required to be treated as an AFI under the VEA.  Additionally, if the aggravation occurred prior to 1 July 2013 but the client had not, prior to that date, chosen to claim under the MRCA, the aggravation is automatically considered as an AFI under the VEA.

Also note that any aggravation of the “signs and symptoms” of a VEA condition by MRCA service are unaffected by the removal of section 12 and may still be accepted under section 30 of the MRCA.  In such a case, Chapter 25 of GARP M will be used to calculate the amount of permanent impairment compensation payable (refer to 12.7 of this handbook for further information in this respect).

Assessment of claims for “aggravations” of VEA conditions under the MRCA 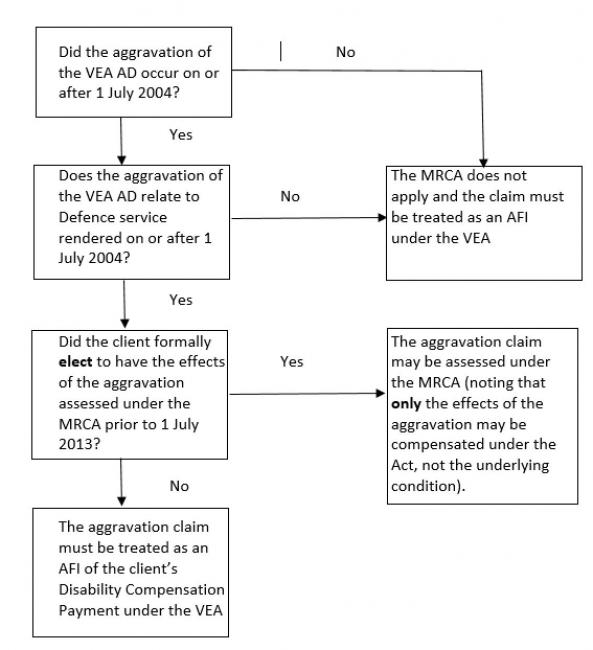