When taking this approach, delegates should record in file notes and in decision letters, that “The date of diagnosis is #### and therefore clinical onset is prior to this date. I am satisfied that clinical onset would have occurred [within the SOP timeframe or within a defined period as supported by the evidence]”.

This approach should not be used when:

These situations may require further investigation to clarify date of onset.

Onset, put simply, is when the disease or injury was first present or first manifested.  Onset can be imagined as a point along a spectrum.  Onset will never be the date of claim or the date a claim is accepted.  It will, however, occur at some point between an exposure or injury and the claim occurring. 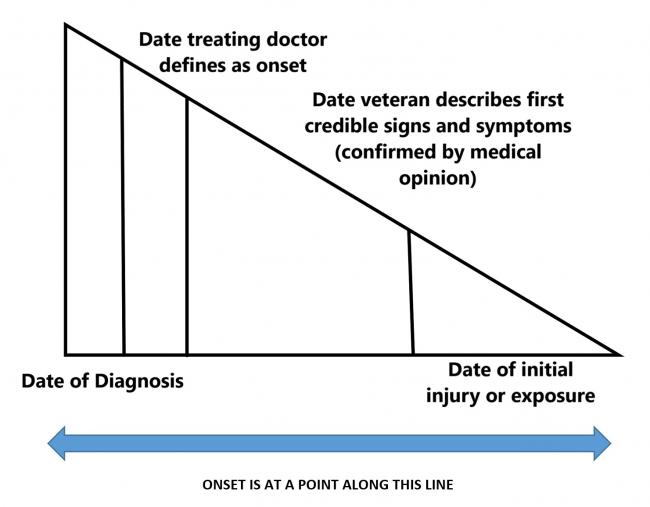 The evidence will need to show when the condition first was present.  Case law indicates that this can be the earlier of the date of diagnosis or the first date where signs and symptoms of the condition are present such that a medical professional can say that the condition was present.

When considering the evidence, consider whether the evidence shows the earliest point at which it could be said the disease was present.  This may be the date of diagnosis (and for some conditions, which require diagnostic tests to confirm the presence of a disease, this will be the date of onset).  For other conditions, a medical professional examining the patient may note onset was prior to treating the patient (which makes sense because people generally only go to a doctor after they feel unwell).  In this case the onset will be earlier than the date of diagnosis, but it will be an earlier date of onset as defined by the treating doctor.

However, when relying on a history from the patient, a doctor may make assumptions about onset that may not accord with other evidence available to the Department.  In this case, it may be appropriate to seek clarification from the treating doctor or advice from a MAC.  Generally, however a treating doctor defining earlier onset prior to diagnosis can be accepted.

A third possibility for the date of onset may arise when there is a suggestion that earlier treatment for the condition was made, or the condition emerged many years ago but was never treated.  In these cases the veteran may be insistent that the condition emerged a long period prior to the date of diagnosis or at an earlier date than the treating doctor has described.  These suggested dates of onset are more complex, but can potentially be accepted if the medical evidence supports the earlier onset of the condition.  This can be tricky – for instance a sore back does not necessarily indicate the presence of lumbar spondylosis – and generally a clarifying medical view, either from medical evidence on file, the treating doctor, a MAC, or an independent medical examiner may be required.  However, these earlier dates of onset can and should be considered when the evidence suggests they are credible and can be confirmed.

Finally, there is the date of initial exposure or injury.  This will not be the date of onset for degenerative diseases, or diseases where there is a latency period after the exposure or injury for the condition to emerge.  However, for acute injuries and for diseases that emerge from exposure at the time of or immediately after that injury or exposure, this date of onset of the condition should be considered.  Usually this will be mentioned in the medical evidence in relation to the condition, but can be considered where this is a plausible date for onset to have occurred.

Where dates provided by doctors or veterans are vague and unclear (eg. “in 2006”) the veteran should be contacted to establish to the best of their recollection when the condition emerged (eg. before or after your birthday, in summer or winter, towards the end of the year, which month, at the beginning or end of the month etc.) in order to establish the most likely date.  If unable to be more specific than a broad date range, the middle of the date range should be considered as the median likely point.

Onset should therefore be considered along a spectrum, and the earliest date of onset supported by the evidence should be considered by the delegate.